Follow The Sattvic Life on WordPress.com
Join 1,174 other followers

Years ago, in my early twenties, I had what came to be remembered as the summer of fun. It was the first year ever that I wasn’t showing my horse. Had I known it marked the end of my competitive riding it may not have been the summer of fun, but I didn’t know that at the time. I was young and single and had a good friend who was also young and single and fun. We spent the summer camping all over Alberta and British Columbia. On a whim we would pack up our tent and our dogs and take off for parts unknown in search of adventure.

Near the end of the summer we added some other friends to our posse and went house boating on the Shuswap. Our boat had those wonderfully loud speakers to blast music and our theme song quickly became Bad To The Bone by George Thorogood. Whenever it was time for us to drive the boat, go swimming, or pretty much whenever we needed to be heard we would blast out the beginning of that song.

To me those guitar riffs that start off that song hold memories of fun, sun, smiles, friends, and self confidence. It was a time in my life when I was happy with who I was and had confidence in who I was becoming.

This morning as I sang loudly and badly to Bad to the Bone on my morning run I thought how easier life would have been had I not been broken. How differently would my energy have been used had I not had to spend it fixing myself? The good thing is that like many breaks I am healing into a stronger version of who I was. And maybe that’s what I needed to do.

I’m thankful I have the strength to keep reaching for better things.

My happiness moment today is supervising my kids as they supervise my sister’s kids in the play zone at the mall. It’s fun watching the four of them run and play with each other. Cousin relationships are special and I’m thankful they have this opportunity to bond together. 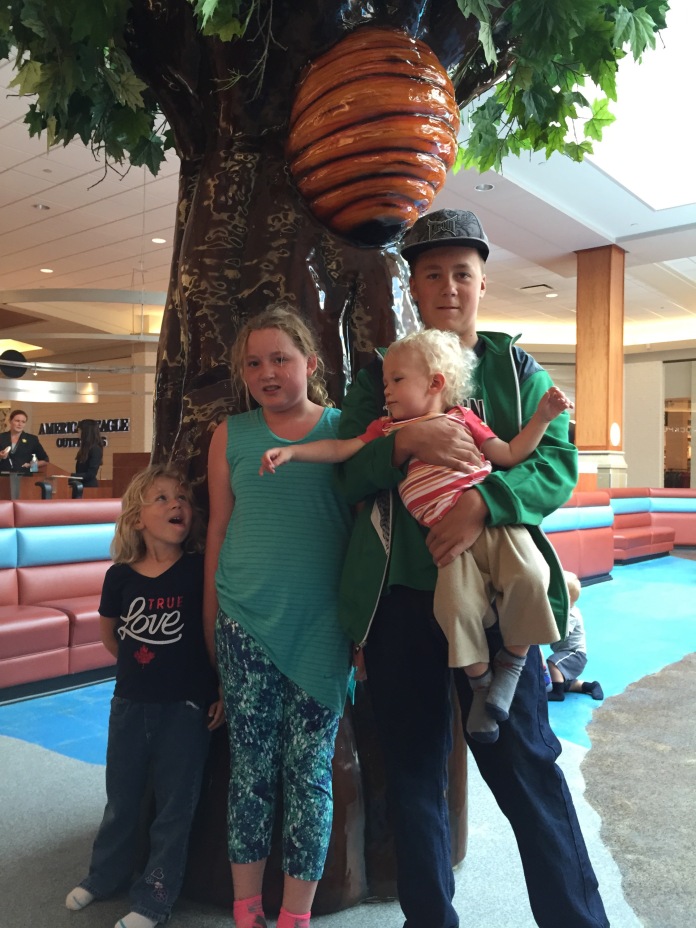 I finished off Stampede Week by eating an entire bag of Those Little Donuts. I’m not kidding and I’m not proud of it (I’m a little proud actually). After serious testing over the years I can tell you that they’re the best mini donuts in the park – probably because they make them as you order them. And we ordered a lot last night. A bag for everyone and then it was fight to the death to hold onto yours. I lost one of my donuts to Jenna because I wasn’t paying  enough attention, but after that I held my bag closer. A very non-Ayurvedic meal, but a fun one nonetheless.

But now that Stampde is over I need to get back to a better routine. Who am I kidding? I’ve been in a bad eating routine since we moved back. Better than it could have been, but I most certainly dealt with Dad’s illness and death by eating every piece of cake I could get my hands on.

Now is the time to change that. I want to have lots of happy and healthy years ahead of me, and I know the best way to do that is to honour my body and soul.

I haven’t gone out walking since Dad died – not because of Dad, but because of all the grizzly bears in the area. Anyone who tells you they’re all disappearing doesn’t live where I do, that’s for sure. On my walking path there was a mama and her triplets and then a few days later a male. I became bear-a-noid and did my working out on the elliptical at home. Fine, but not nearly as good for my body and soul.

Today, bears be dammed, my Dotted Dog and I headed out for a walk/jog. I’m not a runner, but I’ve done the couch to 5K program a few times and liked/hated it. I don’t mind small runs when I’m in shape – no desire for long distance ones. I put some music on my phone – music from a time when I was younger and felt strong and powerful – and headed off.

As I was jogging along singing loudly to Rebel Yell (which I knew would have the added benefit of scaring away any wildlife – unless they thought I was dying and therefore easy prey), I realized that was exactly what I am starting to do – finding my own rebel yell. Three years ago my body and soul were both broken. I had finally realized that unlike Sleeping Beauty, my Prince Charming was not going to rescue me and that I had better wake my own self up. And that I have. Sometimes I feel weak and not good enough, and then I remind myself of how far I’ve come. Three years ago I couldn’t walk across the room without being in unbearable pain. Now I run around, ride horses, garden, play with the kids, go walking, and do yoga – all impossible things three years ago. Thank goodness I decided to become my own hero. In doing that I also showed the kids they can become their own heros too.

I think this building a better me is part of why I love living in this old house we live in so much. I can relate to this place. This house has been neglected and was empty, but it is deeply loved by the entire (extended) family. We are pouring life and love back into it. Good things come from this house.

My happiness moment was Jacob lying with his huge teenage body on the couch. He looked at me as I walked by and said mom, please don’t tickle me. Which of course meant I sat right on top of him pinning him down and counted all his ribs. When he laughs like that he’s just like little Jacob of his younger days. The dog got so upset that he was getting all the attention she jumped on top of him as well – which worked out for me as I was able to tickle him better. Small happiness moments – what life is really made up of. Although our big happiness moments are pretty awesome too.