I’ve been having an ongoing happiness moment for the past few weeks. A couple of months ago I started having rumblings inside my soul that big changes were about to happen yet again. I wasn’t happy about this, as the changes I’ve had in the past couple of years have all been difficult and drastic – but I’ve also learned that there isn’t much I can do to stop a life change once it starts happening – I can either embrace or resist it.

In the subtle way that God has of making His point, I have been made aware of the fact that for years now I have been expecting and settling for far too little from myself and from my life. This fact was driven home a while ago (by someone whom I had loved and trusted) informing me that I was not good enough, not attractive enough for them to want to be with me any longer.

It left me with a WTF moment. Instead of the crushed feeling I was expecting, I felt this screaming from inside saying wait…. you think I’m not good enough for you??

I have been told by a significant man in my life for years that I wasn’t the perfect image he wanted standing by his side. If I’d gain weight, the roll would be grabbed and made fun of, if I said the wrong thing I was reminded of it for ages afterwards, if I wore an outfit that he didn’t like I was told very blatantly that it wasn’t something that looked good on me. It crushed me hearing that year after year, knowing that there was nothing I could ever do to change myself enough to make him like me – let alone respect me. And obviously I didn’t either like or respect myself then either.

It sent me into a life crisis so I stopped my world and settled into figuring out who I am, how I feel about myself, and what I want from life. This will be a lifelong process, but I know I’ve been walking that path for long enough that now at least it is familiar to me.

So, when I was told once again that I was not good enough instead of believing it, as I would have in my 30s, I gave thanks that I’m in my fuck-you-forties and have been able to spend some time analyzing how I feel about those words instead of hurting over why he didn’t want me. Because who cares why he didn’t want me, that is his issue, mine is to figure out why I was with a man who didn’t respect me (again). What was wrong with me that I allowed for relationships like that?

What it has left me with is the realization that now is the time to start expecting more from my life. I’m done settling, I’m done with not pushing myself to find out how far the gifts that God gave me can take me. It’s already had me pushing at some of what I thought were my limits – I’ve found that I’ve been able to walk through walls I had built up with very little resistance.

I’m in a phase of my life that is filled with no limits and no fears. Or at the very least, the fears I feel are no longer going to stop me from pursuing my dreams, from sharing my gifts.

If it sounds like I’m bitter, I’m not. I’m actually deeply and profoundly happy. I have healed in the past year to the point where I not only feel like I’m not broken, but am understanding that maybe I was never broken.  Maybe, just maybe, I’m exactly where I need to be and I’ve had those experiences so that I could learn exactly what I was supposed to learn.

I have fears, but I have a stronger faith. God has been walking so closely with me these past few years as I’ve been sorting things out. It’s time for me to embrace the faith so I can let go of the fear. 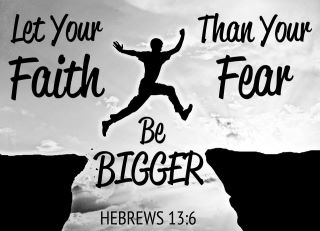