Follow The Sattvic Life on WordPress.com
Join 1,182 other subscribers 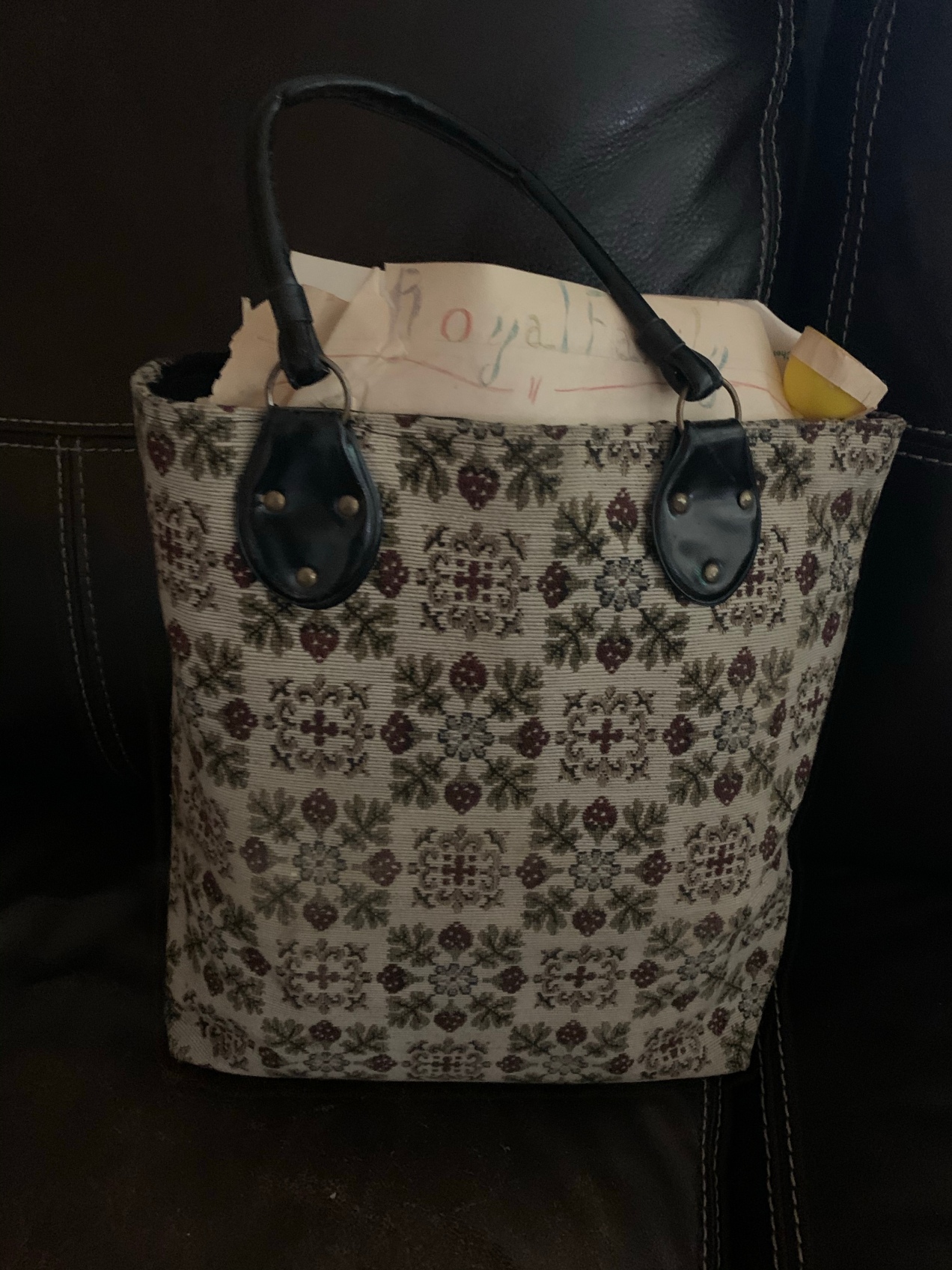 I kind of thought maybe carpet bags were something that only Mary Poppins carried around. But I discovered this bag hidden in a closet, and it’s full of odd assortments of mom’s throughout the 1950s. There were lots of old newspapers, both clippings and full papers stuck in here (as an aside, no wonder Mary Poppins used one of these bags, I was beginning to think it was bottomless – it’s amazing how much stuff fit in there).

A lot of it was about the royal family, and it seems mom had the same kind of obsession with Princess Elizabeth that I had with Lady Diana (who am I kidding, I’m still kind of obsessed with her, she was an amazing woman, but I digress).

As I said, it’s the most random bag of goodies. Here’s a photo of my aunt – I believe when she graduated from nursing school. There was also a letter from my uncle to my grandparents who were away on vacation somewhere. The letter was full of how much he’d fed the cows (down to the weight of both the feed and the cows), and how day to day things were going on the ranch.

You know, sometimes I wonder why we keep so much old junk around. But I think maybe it’s for moments like this. So we can go back through our past to figure out who we are.

Mom would have been 16 when this caricature was drawn. The same age my girl is now. It took me a long time to figure out how I felt about this picture. Part of me thinks mom would have hated it, but then she kept it for all of this time, and the tape on the sides tell me she probably even hung it up. I think it represents how she took on life after polio took her body. That brain of hers was amazing, she was a lifetime learner, and who she was… what was inside her… it was so impressive and took up so much space that it was usually what people noticed first before the chair.

I had to add these slippers in, it’s unfortunate that you can’t tell from the photo, but they are the MOST uncomfortable slippers that have ever been invented in the history of forever (maybe not, but they’re super uncomfortable). While the blue fuzz isn’t that bad, the outside is some sort of bristly, cable-like, woven threads of yuck. It makes me appreciate my comfy, warm, UGG slippers.

Mom did high school at a boarding school in Florida, and this menu must have come from there. I had to do a closeup of one of the dish write ups because it’s a story telling menu and I thought it was kind of fun.

But, my friends, I saved the best for last. My parents loved it out on Vancouver Island, they even had a home that was to be their retirement home (best laid plans and all) and we spent a great deal of time enjoying what Vancouver Island has to offer. After they sold the house in the 80s, they continued to vacation there regularly, and before Covid I was taking the kids out every year for Easter- it’s a place that holds a lot of love for me and my family.

Anyway, one year when I was about 10, my cousin came with us. Either Victoria was safe enough, or my parents were naive enough that we were allowed to run the streets by ourselves. We found a joke shop and thought it was the best thing we had ever discovered. Along with a whoopee cushion (that did not go over well at all with my parents but we found it hilarious), we bought several licenses that gave us permission to do things. Among them was a license to burp, which like the whoopee cushion we found hysterical but mom did not.

It is nice to see though, that at some point in her life she also decided she needed a sarcastic and sassy license.

Now, if you’ve ever driven with certain members of my family (I’m not naming names, but you know who you are), you’d understand the necessity of a license like this. So, perhaps it was less of a joke and more of a not so subtle hint 😉.

Along with the magic carpet bag, I found all of the letters and cards that were sent to Mom while she was in the hospital. I spent most of yesterday crying and reading them. There was so much love sent to mom, mixed in with details of ranch life in the 1950s which I’ll talk about later on.

But tomorrow I go back to the tape. I’ve got a few stories about Mom’s love of climbing things to share.

Thanks to everyone for the love and support, I hope you continue to enjoy these stories.