So, I was in the basement this morning looking for my winter boots because eventually winter will show up and I know I shoved them in a mouse proof (haha) container in the basement sometime last spring. I didn’t find the boots, but I did find another random box filled with Grandma’s memories. It’s got old newspaper clippings, photos from the 1920s to the 1970s, photos of her 80th birthday, a gorgeous painting that she must have done, and the complete version of her life story!

I know I shared the abridged version earlier – I had given up on finding the complete story. But now that I have it I’m going to share it in its entirety. So there will be parts that repeat what was shared before- but I think sharing the whole thing again will make the story flow better than trying to chop it up.

“Ouch”, that was me when Dr. Park spanked my bottom when I was born in our house in Cochrane. What a difference to the soft touch the babies have now when born. No wonder we’re a hardy race, it was survival of the fittest. Then I remember my mother trying to talk to me into an afternoon nap a few years later. My father rocking me in his arms in the rocking chair and singing to me to ease the pain of an earache with a bag of warm salt pressed to it. The rocking chair had a coyote skin draped over it, a big hide tanned and lined with red felt with scalloped edges.

These dear old hills of Cochrane provided endless fun and adventure for a child living in the village. Picking flowers in the spring, building playhouses out of stones just a laid on the ground in a pattern, etc. And galloping around on my stick horse. Then when the winter snows came there was nowhere could compare with the marvellous speed of a bobsleigh coming down the Cochrane hill, then hitting the road and flying on down nearly to the front street. The only traffic was horse-drawn and they panicked from us, not us from them.

It was awful having only one sister and she was six and a half years older than me. I just couldn’t keep up to her, hard as I’d try, and she tried equally as hard to leave me behind. So I amused myself with whatever was handy and nearly always was a horse. My dad had an old black race horse loose in the yard and I would often crawl up on his back from the fence or the back porch or a pile of boxes placed on top of the other and I could ride him around the yard when I was three or four years old. One day when I was playing quietly in the shade of the house, Father Hermes rode by on a spirited horse which suddenly dumped him off on the dusty road and jumped the fence into our yard, racing around with dad’s old horse.

We milked a cow. I remember her well, she was mostly black with a bit of white and we called her “Sloppie”. Bought her from Bobbie Butler. My mother churned and I used to take a pail of fresh buttermilk over to Mini Bailey (Now Mrs. Allan). She loved it and I loved to visit her mother “Granny Bailey”, the dearest Scottish lady anyone could ever wish to know. Jean Russell, Granny’s granddaughter used to spend much of her time with them and she and I have been the closest friends ever since we were five years old. Jack Bailey was the baker in Cochrane and he had a confectionary store and ice cream parlour. Jena and I spent many, many happy hours down in the store with Uncle Jack.

Ruth and her friends used to spend hours racing around with a stick, letting a small wheel roll down the stick then controlling it with the cross bar of the stick and racing as hard as they could go. I don’t remember ever doing that much myself. Ruth walked around on stilts a lot more than I did too. Our father built us a marvellous swing in the yard. The poles seemed like telephone ones to me they were so high, and then he put a long pole across the rope with handles to hang on and you sure could swing high. One day when Ruth and Dot Johnson were swinging, a man came up behind Ruth and spoke rather harshly to her while she was down and Dot up. Ruth jumped off, raced to the house, and let poor Dot down with a plunk.

All the girls Ruth’s age had lovely ponies to ride so our Dad bought quite a beautiful colt from an Indian. It was extremely quiet but also extremely thin. She called him “Spider”. Of course I rode it around the yard every chance I got, but my… it became mean! The fatter it got, the meaner it was and even Ruth couldn’t handle it finally. There is nothing much meaner than a mean horse! It always ran under the clothes line and got rid of me quite easily and my neck had quite a scar on it. Then it would charge us with its mouth open. How I envied Ruth going out riding with her friends, Amy Cook on her lovely pony “Snowball”, Dot riding old “Pod” etc. My favourite dream when a child was me riding an extremely beautiful big white horse, and I’ve never owned a white horse.

I’m adding what has to be the weirdest photos – but goodness they look like they’re having fun. And also the actual meanest pony that ever existed.

We don’t have water at our house right now, which is one of the side effects of living in an old house in the country (still wouldn’t trade it for anything, I love our home). Fortunately, what we do have is a hero in cowboy boots in the form of my cousin’s husband who has been working hard the last 2 days (in -15 to -20C temperatures) to rectify the situation. It all falls under that Life is an adventure thing.

Because I don’t do well without showering (and OMG the smell of teens and tweens), we headed into Grandmas for a visit and a shower. She has an endless hot water tank so it was pretty sweet.

Speaking of sweet, when I got out of the shower I walked into a baking extravaganza in the kitchen. Jenna was rolling and shaping shortbread 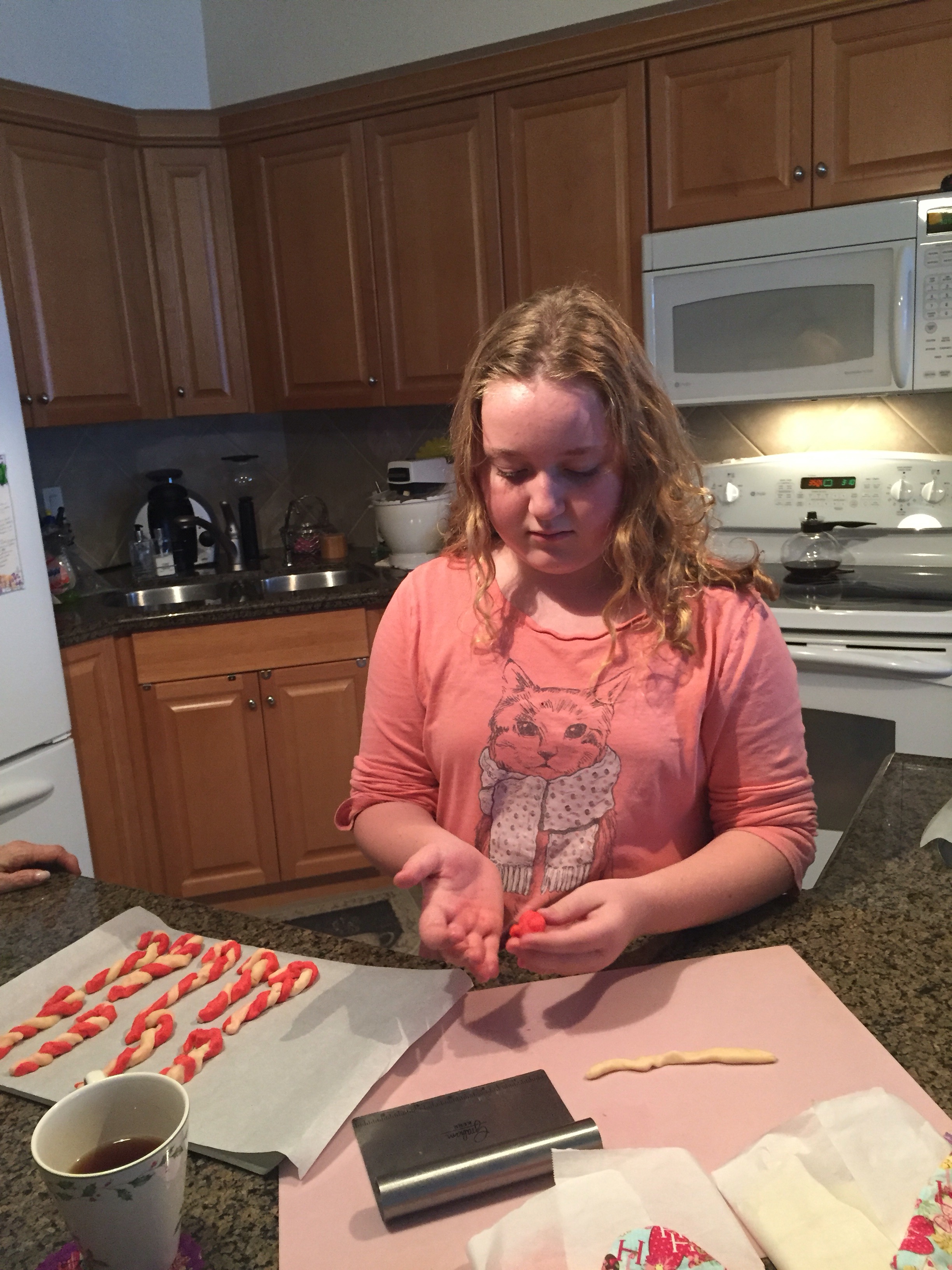 On the side of the baking sheet is Mary, Joseph, and Baby Jesus.

Jacob walked right over to the fresh bread and made a grilled cheese. As he does whenever he’s in to see grandma.

Not to be left out, he then jumped in and made gingerbread cookies.

There’s something so special about the relationship kids have with grandparents. I have such fond memories of fun times with my Grandma, I am so happy they get to build memories of their own with their grandmas. I’m extra grateful they were able to make memories with my dad, they’ll cherish those forever as well.

My happiness moment; hearing my son say life is good as he rolls out gingerbread while his sister hovers behind waiting her turn.